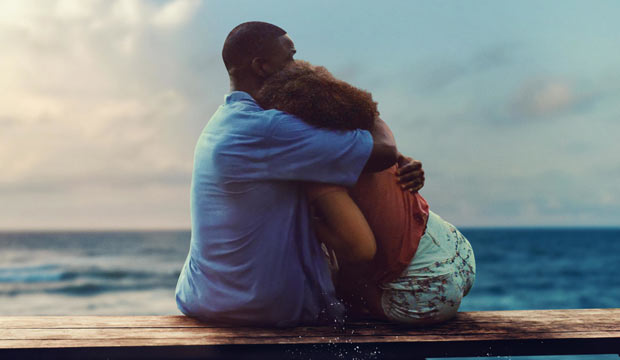 The Premise
Set against the vibrant landscape of South Florida, and featuring an astonishing ensemble of award-winning actors and breakouts alike, WAVES traces the epic emotional journey of a suburban African American family— led by a well-intentioned but domineering father (Sterling K. Brown, This Is Us)— as they navigate love, forgiveness, and coming together in the aftermath of a loss. From acclaimed director Trey Edward Shults, WAVES is a heartrending story about the universal capacity for compassion and growth even in the darkest of times. 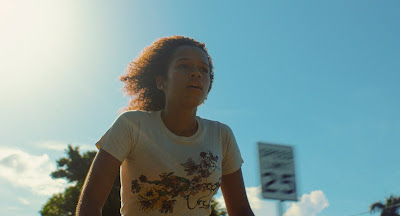 The Review
Where to start, as I am still digesting my cinema experience, as I sit here typing away writing this review. The film ‘WAVES” still has me in its grasp, it certainly is an intoxicating film. I feel need to say this, and punctuate, how important it is experiencing this film in the cinema. Its visceral, its sonic, a visual and sound encompassing experience. Grabs hold of you, puts you in this intense, emotional pull, anxiety pumping, rollercoaster ride. I found it to be beautiful cocktail of dramatic intensity.
What originally looks like a teenage movie, it certainly rises above, becomes more a powerful drama of interconnecting characters within a family. The story first revolves around Tyler, a teenager coming into adulthood, hopes of wrestling scholarship, an overbearing father with dominating drive and control. Tyler’s life is on a tumultuous spiral, issues arise with his girlfriend, the pressure of his father, a shoulder injury that is threatening his wrestling endeavours. With this drama encapsulating, into forbidding outcomes, experiencing the film becomes more tension and anxiety building. The characters portrayals prove more to be of complexity, but yet of human nature, we can feel and see ourselves with in this environment, it's an intoxicating drug of emotions. 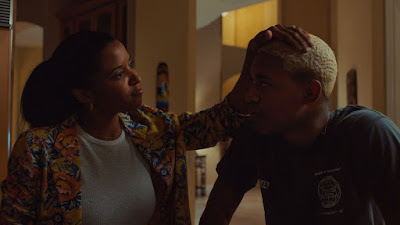 WAVES reaches a point where the narrative comes to what is normally the finale of a storyline and plot. But with WAVES, it then takes us on the next wave, outcome and human growth, and repercussion and searching for meaning. At this point Emily, Tyler’s younger teenage sister, takes the mantle in the narrative, her beautiful innocence of soul, takes and moves us forward further interconnecting human emotions. Every character has depth, a Father coming to terms of himself, a Wife/Mother losing hope direction. Everything in life becomes questioned, finding and navigating love, loss, and what is forgiveness. The drama is striking, Shakespearian, moving, complicated, moved to tears, anxiety tension. WAVES leaves an indelible impression.
I have mentioned earlier how the film is something that is to be ‘experienced’, I didn’t want to tie this review up in all its story plot points and characters arches, etc, because I always feel it takes away from seeing the film fresh, as I was able to. WAVES has taken the medium of Film, to levels of visual and sound stimuli, of virtual symphony of colour, cinematography, sound design. WAVES is deliberate in its construction, you are aware of its design, swirling camera moves, light and colours flaring and abstracting the screen. A visual experience on a subconscious level, even the image ratio goes through changes, the image tightens in its aspect ratio, as tension builds with in the narrative. You may not even see it happening but you certainly experience it. Which leads me to the technical skill of this film, for me its a marvel, beyond just the visual stimulus, there is the soundscape design, is something of pumping mesmerising induction.

There is a moment in WAVES, that you will feel, it has come to its natural resolve, where can this go now, it may feel as a lag, a drag. Though this is in purpose of its design, it rebuilds and brings on new dramatic propulsion. You could argue the film is in two parts, but I could argue it also takes two parts to make a whole. WAVES holds you, or should say grabs hold of you, and takes you on this dramatic journey on many levels. I just feel I am not giving WAVES justice in its description in this review, I guess it’s me still trying to come to terms with the experience I just had with this film.
The Director/Writer, Trey Edward Shults, has created a masterful film. The cast is amazing, their characters hold a lot of weight. It is interesting at this stage to note, what is obviously a Black American Family, I wasn’t tied up in issue of race, I was tied up in human story and drama, masterful stroke of the power of this film. I fully believed in the portrayal of this family, the casting was fantastic, at times when I looked at the son Tyler, I could see his Father reflected in him, they just felt like a blood family. Put simply the whole cast is brilliant in their roles, and that is also because of the work from the Director and writer Trey Edward Shults.
I will be left dumbfounded if this film is not nominated for best film at the Oscars.
The Verdict
I for one found it to be an incredible film of immersive and sensory experience, a film that touched my dramatic soul, I literally felt and experienced this film WAVES, and I hope you the viewer will have the same. I just loved the style and design of this stunning complex dramatic film.
The Trailer
The Info
Releases: 23rd July 2020
Rating: R13 - Contains Domestic violence, offensive language, sex scenes, drug use & content that may disturb
Duration: 136 minutes
Genre:  Drama
Starring:  Taylor Russell, Kelvin Harrison Jr., Alexa Demie
Director: Trey Edward Shults
Labels: Drama Film Reviews Glenn Blomfield Waves