The Vigil Reviewed by Joseph Hoshino

The Premise
In the Hasidic community of Boro Park, Brooklyn, a despondent young man, short on both faith and funds, reluctantly agrees to assume the responsibility of an overnight shimmer and fulfil the Jewish practice of watching over the body of a deceased member of the Orthodox community. With only the company of the recently departed and an ailing widow who expresses cryptic reservations as to the man's ability to carry out the task, he soon finds himself exposed to a terrifying haunting within the claustrophobic confines of a home that has become host to a malevolent entity. In what is essentially a one-man show, Dave Davis is profoundly affecting in his portrayal of the hesitant sentinel, exuding an empathetic combination of frayed nerves and timid weariness. 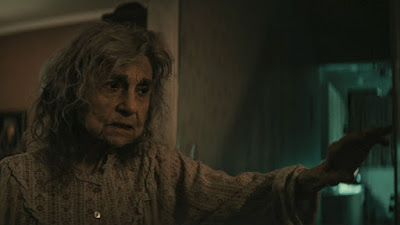 The Review
There’s nothing like a good old scare flick to remind us that when something sounds too good to be true, there’s likely to be a catch.
One night of house sitting for a dead man should be fairly simple, especially when it’s paid work right? Sure it’s not completely ideal, very morbid actually, but for someone struggling to pay rent in New York and often having to choose between food and medication, this could seem like a pretty good start. Of course this all starts to go sideways into a one-man battle Conjuring type of situation.
Blumhouse have often made fantastic use of smaller budget horrors with some even exceeding expectations and having bigger success than those that just get wrapped up in greedy corporate studio interference. In the case of The Vigil, most of the film takes place in the one house and makes pretty good use of that in its 90 minute runtime. The scare style they go for here is more creepy and unsettling, rather than upfront gruesome and gory. Marketed as a Jewish horror, the demonic spirits and monsters are hidden for most of the time leaving the suspense and shock to build up over the course of the film as our lead man starts to question his own sanity. Even with the film’s religious background, it doesn’t dive very far into the theology or rituals and aims to show a somewhat Paranormal Activity type of story. 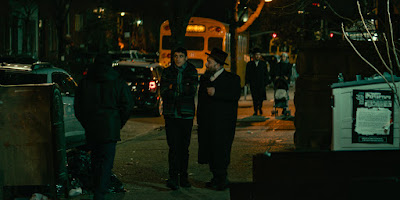 In terms of a more minimalist approach to horror, I’d say this one holds up quite well. Everything appears to be shot in real sets, real locations and the main star Dave Davis is very convincing as the one to carry the suspenseful weight of this film on his shoulders. Much more admirable than just plonking him down in front of a green screen and getting him to act his way through that. As far as the actual plot goes, it may be harder for some audiences to relate to the orthodox themes but in following the mystery and main drive of the film, it’s still engaging to see through. That being said, I didn’t feel like the story went anywhere game-changing or so refreshing against films we’ve already seen before but rather comes from a more simple passion-project approach.
The Verdict
One of the more basic approaches to horror that doesn’t try to overload itself with stupid characters, complicated storylines and excessive CGI. Not too groundbreaking or new but a good watch for those that love a good scare.
The Trailer
The Info
Releases: 23rd July 2020
Rating: R13 - Contains Strong supernatural horror
Duration: 90 minutes
Genre:  Horror
Starring: Dave Davis, Menashe Lustig, Malky Goldman
Director: Keith Thomas (Firestarter)
Labels: Film Reviews Horror Joseph Hoshino The Vigil