The Oscar-qualifying 15th annual Doc Edge International Documentary Film Festival (Doc Edge) is thrilled to announce the winners of the 2020 Doc Edge Awards held online on 19 June. The Festival and all its associated events run online this year across the country until 5 July. These awards are a celebration of the vital work of exceptional filmmakers who tell stories from our backyard and around the world.

Doc Edge Best International Feature goes to A Thousand Cuts by director Ramona Diaz which opened the Festival a week ago. Since then, the film’s main subject, journalist Maria Ressa, has been convicted of ‘cyber libel’ in the Philippines whose President Duterte is on record as saying, "Just because you're a journalist you are not exempted from assassination." The film is a powerful account of Ressa’s fight for freedom of the press. In her own words, "We’re at the precipice. If we fall over we’re no longer a democracy." Filmed over five years on seven continents, Elementa from director Richard Sidey, takes out Best NZ Feature. Elementa is a compelling visual meditation of all that is wild, and the judges commended Sidey, saying, “Elementa stands out as a film that pushes the boundaries of the documentary form through innovative artistic and stylistic choices that leave a lasting emotional impression.” Director Felicia Taylor wins Best International Short award with Far From Home which the judges called “a deeply moving and beautifully shot film that has stayed with us.” The film follows a young Senegalese boy whose existence has been forever altered by climate change. Back at home, Pluck takes out the Best NZ Short award. Filmmakers Kirsty Griffin and Viv Kernick follow Jean to the Chatham Islands to make her daughter’s korowai.

These four films now qualify for consideration for the 2021 Academy Awards, to be held on 25 April 2021 which coincides with Anzac Day.

Other New Zealand awards include a second win for Elementa for Best NZ Cinematography; Best NZ Director and NZ Editing for Stevenson: Lost and Found by Sally Williams; and Best NZ Emerging Filmmaker won by Yeshe Hegan for Return to Gandhi Road. 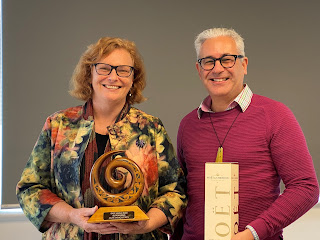 Each year, Doc Edge recognises an outstanding contribution to documentary with its prestigious Superhero award. The recipient this year is former Chief Executive of NZ On Air, Jane Wrightson. Hon Kris Faafoi, Minister Broadcasting, Communications and Digital Media, presented the award to Jane together with Doc Edge Directors. “I’m thrilled to receive this award, most particularly simply as a documentary lover rather than a documentary maker. I’ve been commissioning, funding, and otherwise supporting local docs for well over three decades, and it’s been wonderful to see the exponential growth of volume, craft, complexity, creativity and story over that period.

“Doco makers have taught me so much and I’m forever in their debt for the consistent challenging and advocacy for the craft and its contribution to storytelling that matters… I’m so grateful for this most unexpected honour. Ngā mihi.” – Jane Wrightson

The full Doc Edge Awards 2020 presentation will be available on the Doc Edge Facebook page.