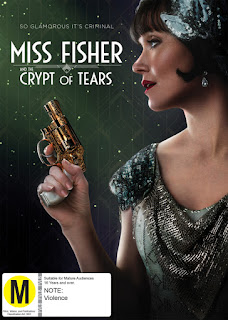 The Premise
After freeing a young Bedouin girl from her unjust imprisonment in Jerusalem, Phryne Fisher begins to unravel a decade-old mystery concerning priceless emeralds, ancient curses and the truth behind the suspicious disappearance of Shirin's forgotten tribe.
The Review
First broadcast on TV in 2012, the character of Miss Fisher has dazzled audiences with her mystery solving detective skills in the much-loved series Miss Fisher’s Murder Mysteries. In fact, this show ended up screening in over a hundred territories around the world. So, it was kind of probable that it might end up at some stage hitting the big screen. Well that was the plan. Miss Fisher and the Crypt of Tears was all set to grace the cinemas of the world in April 2020, until a pandemic hit, and plans had to be changed. It has now started it’s viewing journey in the massively growing world of digital streaming and online buying. It is probably not a bad things as we have certainly grown accustom to watching a good old adventure mystery on our telly on a Sunday night and so it would make sense that audiences could jump aboard this way of being introduced to a film. 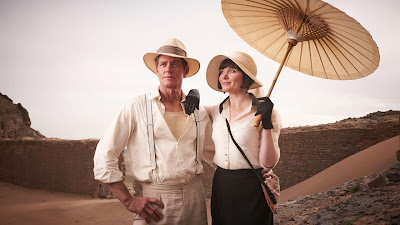 Just like the Miss Fisher's Murder Mysteries television series, the film has been based on series of Phryne Fisher novels written by Kerry Greenwood. So, the same humour, adventure and overall feminine pluckiness that we have come to love continues in abundance. The overall feel of the film reminded me of an earlier age of cinema, when it was all about the big dramatic feel with sweeping orchestral sounds tracks and witty back and forths to stitch it all together. I felt like I was watching an Australian remake of films like On the Waterfront, Casablanca with a touch of Indiana Jones thrown in for good measure.

There’s romance, comedy, loads of adventure filmed in exotic locations but most of all there is great entertainment as a mystery is solved.

The Verdict
Miss Fisher and the Crypt of Tears is super entertaining and very family friendly so it could be the perfect film to watch all together with your sausages and mash as you ride out social isolation.