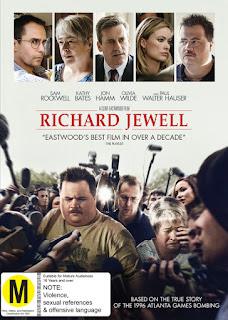 The Premise
American security guard Richard Jewell saves thousands of lives from an exploding bomb at the 1996 Olympics but is vilified by journalists and the press who falsely reported that he was a terrorist.
The Review
Clint Eastwood (Gran Torino) is a living Hollywood legend and like a fine wine or mature cheese he just keeps getting better with age. It appears that regardless of content Eastwood can take a script and a cast and simply blow an audience away with the finished product. Richard Jewell is an excellent film about misinformation and trial in the court of public opinion. It is somewhat ironic that in this social media age we are waxing lyrical about a movie that highlights the dangers around the improper use of media from twenty-three years previous.

Paul Walter Hauser’s  (Blackkklansman) performance as Richard Jewell is nothing short of remarkable as he manages to take you with him on his unfair and torturous journey as a suspected terrorist. I do not know what it is about him or the character he portrays but you can’t help but like the guy.

Without Hauser or Eastwood this film and its story may have simply passed most of us by.

Sam Rockwell’s (Three Billboards outside Ebbing Missouri) influence is gathering pace and he chips in with yet another classy assist. His relationship with both Jewell and Nadya are at the centre of the films comedic elements and they cleverly break up the heavier scenes with some laugh out loud one liners. Rockwell really deserves more credit for his work and his ability to steal scenes.

Kathy Bates (The Blind Side) is just as standout in her role as Bobi Jewell whose life was also brutally affected by the media portrayal of her innocent son. Bates oozes quality as she is put through the wringer by the bumbling and cruel FBI who along with amoral journalists invade every inch of her privacy..

Put this all together and you have a slow-burning blockbuster of a true story that takes you back to an authentic 1996 and knocks it clean out of the park.

The Verdict
You can’t always believe what you read on the internet but take it from me Clint’s latest is a real gem.